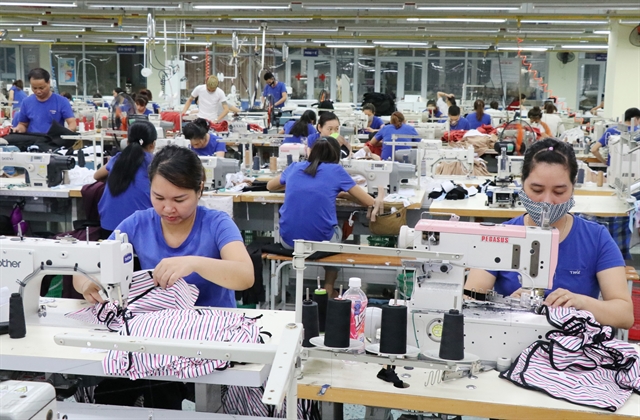 HÀ NỘI – Việt Nam Textile and Apparel Association (Vitas) said the total export value of textiles, fiber, and cloth reached US$25.7 billion in the first 8 months of the year, up 8.6 per cent year on year, including 60.6 per cent from foreign direct investment (FDI) enterprises.

According to the Ministry of Industry and Trade, domestic textile enterprises face many challenges in production and business activities.

The US-China trade war has affected exchange rates, leading to higher prices of processed goods in Việt Nam compared to regional competitors such as South Korea and China. That has also affected the number of export orders for local enterprises.

In the first eight months of this year, textile production and exports have grown over the same period last year, but due to changing orders, local businesses need to have solutions for production and business.

Industry experts said export orders have fallen. Some businesses have only received 70 per cent of new orders against the same period in 2018.

In 2018, many large enterprises in the industry had export orders throughout the year, while this year, they could only sign monthly export contracts with small volume. Buyers are concerned the US-China trade war will escalate, so orders are broken up instead of in bulk.

Phí Việt Trịnh, General Director of Hồ Gươm Garment Group said the firm's orders have fallen against the same period last year. But there are still enough jobs for workers. It expects by year-end, orders will increase because demand is higher in the last months of the year.

As the third quarter comes to an end, it is unlikely that Vietnamese textile enterprises will increase exports due to the on-going US-China trade war as some previously predicted.

In the textile and garment industry, enterprises from South Korea and Taiwan in Việt Nam have gained advantages from the trade war because they own production factories under the value chain.

“Korean textile and apparel companies in Việt Nam are the biggest beneficiaries of the trade war. This country’s 143 enterprises account for about 50 per cent of Việt Nam's textile and apparel export value to the US,” FiinGroup, a financial and business information provider in Việt Nam, was quoted by the Đầu Tư (Investment) newspaper as saying.

Việt Nam has not seen investment flows to the textile and garment industry due to the US-China trade war, according to the Việt Nam Textile and Garment Group (Vinatex). There have not been significant shift in production from China to Việt Nam.

The investment from a country to another depends on many factors, said a Vinatex leader.

Nguyễn Thị Thu Trang, Director of the WTO Centre under the Việt Nam Chamber of Commerce and Industry – VCCI, said Việt Nam has not benefited from the trade war as many forecasted, including the moving investment from China to Việt Nam.

Another problem is that although the export turnover is large, the domestic textile and garment industry still lacks input materials. It has to import all cotton and 80 per cent of fabric and other material from China and India so the product costs of domestic firms are much higher than FDI companies, she said.