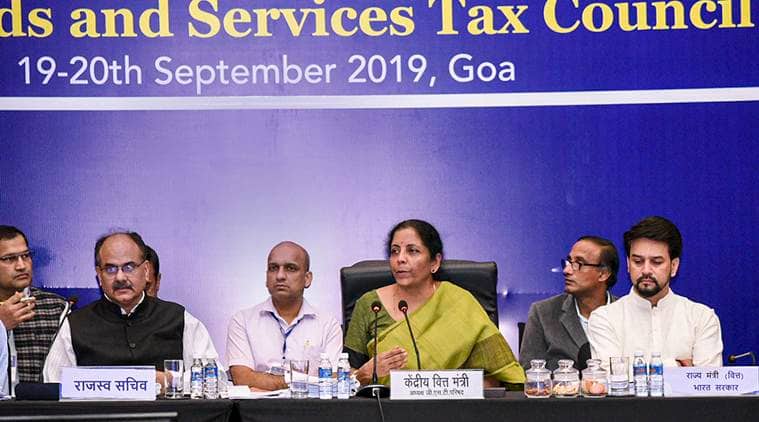 Seven Opposition-ruled states and Union Territories — Punjab, Delhi, Puducherry, Kerala, Madhya Pradesh, Rajasthan and Chhattisgarh — made a forceful representation to Union Finance Minister Nirmala Sitharaman Wednesday demanding pending compensation under the Goods and Services Tax (GST) regime, with some saying it’s an embarrassment to keep asking for money due to them and Kerala warning it may even approach the Supreme Court.

The meeting with Sitharaman comes days after the GST Council informed states that the GST and compensation cess collections in the last few months had become a “matter of concern”. States, in their meeting with Sitharaman, highlighted that as much as Rs 50,000 crore was lying “unutilised” in the compensation fund. The meeting was attended by ministers of Punjab, Rajasthan, Delhi, Madhya Pradesh and official representatives of Puducherry and Kerala.

Punjab Finance Minister Manpreet Singh Badal said compensation was pending for four months now. “Not only August-September, compensation is now due for another two months, October-November…we can’t close jails, hospitals, social security pensions, schools, colleges, canals. States have a huge responsibility and compensation is part of law, Government of India is under obligation to pay,” he said after the meeting.

In a late evening tweet, Kerala’s Finance Minister Thomas Isaac said, “Deeply disappointed with the outcome of the meeting of Union FM and State FMs delegation. No objection to a GoM. But states’ constitutional right of GST compensation is non negotiable. If necessary Kerala government will approach the Supreme Court under article 131.”

Article 131 of the Indian Constitution deals with disputes between states and Centre under the jurisdiction of the Supreme Court. In January, the GST Council had formed a ‘Group of Ministers on Analysis of Revenue from GST’, headed by Bihar’s Deputy Chief Minister Sushil Kumar Modi. A committee of officers from states and Centre was also constituted in October to suggest measures to augment revenues under GST.

State Finance Ministers said it was embarrassing to come to Delhi and ask for their own money. “Humein roz roz Delhi aana achcha nahi lagta. Humne apni financial sovereignty toh Government of India ke hawaale kar di hai, par yahaan aana humare liye bhi ek kisam ki sharmindagi hai ki paise maangne aa rahe hain (We don’t like to keep coming to Delhi frequently. We have handed over our financial sovereignty to Government, so we are embarrassed that we have to keep asking for our money),” Badal said, adding the Union Finance Minister heard their issues and assured of compensation payment “as soon as possible, as much as possible”.

States, however, said they were not assured of any specific timeline. “At the time of GST roll out, we were told states will benefit and that’s why states surrendered their tax rights with the Centre. Centre had guaranteed compensation at a particular growth rate. Now when states are asking for it, we are not being given. It’s not like money is not there. About Rs 50,000 crore is lying as cess collections, but the Centre has held it back. Delhi government’s requirement is about Rs 3,600 crore…bigger states have dues of Rs 4-5,000 crore. Not only Opposition states, but every state is facing this shortfall,” Delhi’s Deputy Chief Minister and Finance Minister Manish Sisodia said.

“We are here asking for our right, not doles… if we do not get back the money that we collect, it goes against the basic structure of GST… Rs 1,500 crore is pending for August-September and another Rs 1,500 crore for October-November, so approximately Rs 3,000 crore in total,” Madhya Pradesh Minister for Commercial Tax Brajendra Singh Rathore said.

Rajasthan Technical Education and Information & Public Relation Minister Subhash Garg also said the state is facing problems due to delay in payment of compensation. It is the money of the states, it should be paid, he said.

Later at a Cabinet briefing, when asked about the GST compensation, Sitharaman said, “Some state finance ministers met and requested compensation amount to be given… All of us are duty-bound to safeguard the interest of states.”

The GST Council wrote to states on November 27 informing them that the GST and compensation cess collections in the last few months had become a “matter of concern” and that the compensation requirements are “unlikely to be met”. The Centre has already delayed compensating states for the shortfall in GST revenues for August-September, payment for which was due in October.

At least five Opposition-ruled states/UTs – Kerala, West Bengal, Delhi, Rajasthan and Punjab, had issued a joint statement on November 20 raising concerns about this.

As per the GST Act, states are guaranteed compensation for any revenue shortfall below 14 per cent growth (base year 2015-16) for the first five years ending 2022. GST compensation is paid every two months by the Centre to states.

The GST Council has now asked states to provide inputs and proposals regarding review of items under exemption, GST and compensation cess rates on various items, rate calibrations for inverted duty structure, compliance and revenue augmenting measures by December 6.

The GST Council is scheduled to meet on December 18 to focus on “revenue augmentation”.